Artificial Intelligence has got a growing lot of traction in recent years and it has proved its efficiency and usefulness in most sectors our there in the world. As we can expect with most things, there are trade-off and some risks associated with the use of AI in every sector. There are some serious genuine concerns in recents years which have been raised in media like Cambridge Analytica Scandal, Data breaches, mis-classification of an innocent as a convict by a facial recognition system.
Although these issues are grave and we need to address them, we will look at the positive future which AI promises and we will also discuss some of the risks associated. Finally, we will present a solution for addressing most of these issues in future and how AI will save humanity.

What is Artificial Intelligence and how ‘general’ it is?

To understand this, lets look at the simplest definition I could find on the arts and culture page of Google

I want to capture your attention to the term intelligence and machines which are subject to their own complexities of defining them. So in a way, AI can refer to Optical character recognition, algorithms used for predicting stock prices to self driving cars.

Why talk about AI today?

It was first in 1950, that Alan Turing first raised this question whether machines can think? [Link]

Since then we have came a far way as depicted in the following figure. 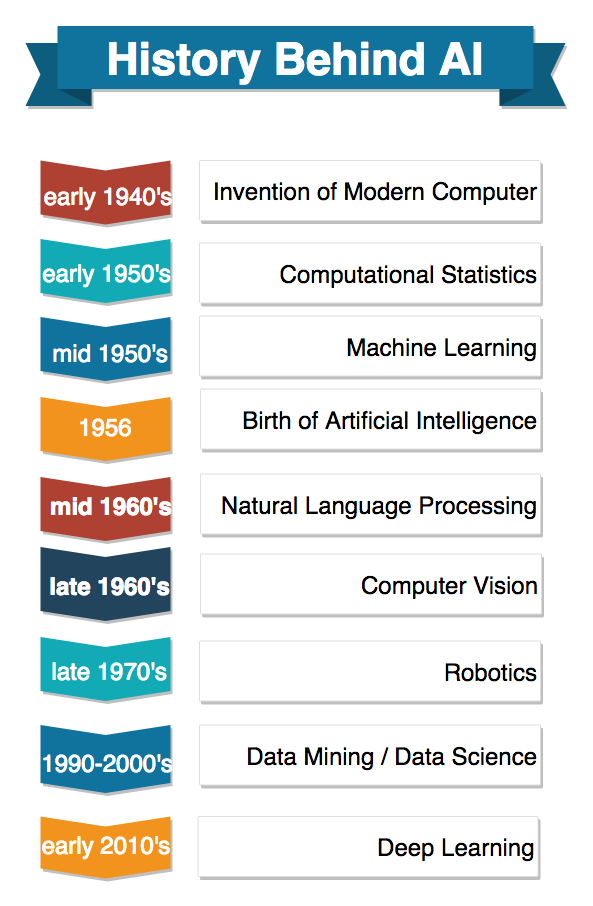 In 2016, AlphaGO beat the world champion Lee Sedon 4 games to none in the ancient game of Go. To understand the depth of this recent achievement, we must know that the number of possible legal moves in this game of Go is 2×10170 which is more than the number of atoms in the whole universe which includes our planet, the sun and everything else, so we should realise that this win cannot be achieved simply by computing the possible moves on a computer and choosing the best, in a nutshell, the AI learns to play this game and it learns so fast that in few days of training it was able to beat the world champion.

What are some current problems humanity is facing?

Since the modern civilisation began, humans have experienced several wars, pandemics and natural disasters. But despite all that, our civilisation has constantly worked on solving the problems and enduring the worst while working on solutions to prevent further cases.

In 1985, for the first time a comprehensive 15 point list was prepared to summarise 15 global challenge humanity face

Currently some of the major global issues mentioned in the UN website are Health, Food, Water, Climate Change, Migration, Population, Ageing, Peace and Security and AIDS.

All of the issues mentioned have a huge potential for AI to solve them and researchers and scientist have already started working on these. What is remarkable is that AI promises to solve problems where we are at an impasse right now on solving them.
In the decades between 1980-2010 and recently, globals challenges have remained mostly the same and there are some areas where we thought we were successful, for example in terms of medicine problem and the common diseases at the time, which was thought to be improved upon, but even then in 1996, futurists thought that the threat of new and re-emerging diseases and immune micro-organisms is growing and thus we must always try to remain ahead and work on these global problems. This was also realised during the ongoing Covid pandemic. So this makes us more confident on focusing to solve the threat of new and re-emerging diseases and immune micro-organisms using Artificial Intelligence.

Along with this some future problems that await us are overpopulation and urban overcrowding, water crisis and climate change. But we should be optimistic in believing that researchers and people across the globe will come up with solutions to tackle this. Although this begs the question, if AI has such huge potential to solve our problems in future, then why are we not “all in” on this solution?. And this question is a crucial one because it makes us think about the promises it holds, but it also makes us analyse the risks associated with it.

Risks with Artificial Intelligence and a way forward

Since there has been an exponential growth in technological advancements specially in Artificial Intelligence, the regulating bodies and governments were lacking in establishing and enforcing ethical policies and prevention of misuse of AI.

Problems such as of data ownership and data misuse, along with political scandals as in case of Cambridge Analytica, are partially result of such carelessness.

Additionally there are some major problems that may unfold such as Artificial Intelligence going rogue and disrupting financial market or triggering wars between countries.

One possible way forward looks that of regulations but should be enforced in such a way that entails the design to deployment process. Let us take an example of use of AI in autonomous weapons ? There might be several pros listed by organisations working on these sectors, mostly based on the statement that “if not them, then someone else will build these.”

Looking back at the human history, taking in account the use of nuclear technology as weapons, we can agree that when powerful technologies when used as weapons, they can lead to cases of Mutually Assured Destruction.

While this paints a picture of a dystopian future, we should rather take actions today that steer the course of action of AI research and applications to areas that solve more fundamental problems of society. And although progress is being made in these areas, even today most of the budget is spent on profit and marketing. Consequently AI is being fuelled to drive big companies and corporation to profit and sometimes even using un-ethical practices. Most of the research in technology is funded by military since the invention of Internet. While this seems normal, if instead of this as the majority driving force in the research and application of AI, if more is funded and backed for solving basic issues like climate change, water crisis, unemployment and health, then the technological progress in Artificial Intelligence Research will not be hampered.
Therefore, it is imperative to regulate and ban use of Artificial Intelligence in dangerous areas such as use in autonomous weapons and other “solutions” which may pose a direct or indirect threat to human life. Additionally we should work on de incentivising Big Tech companies and corporations for misusing data and Artificial Intelligence. This is already starting to come up in various parts of world in the form of strict regulations and policies. Sanctions such as Data tax seems a step forward as well.

How AI promises to solve our fundamental problems ?

Now, let us take a reality check and look at the other major portion of the pie which is solving our basic problems using Artificial Intelligence.

Some future “challenges” regarding Artificial Intelligence

Although we have seen how Artificial Intelligence will play a crucial role in saving humanity, but let us talk about some of the challenges we may face and therefore, we need to recalibrate our course as a whole humanity on solving them.

Interestingly in all the following cases, the approach of Human in the loop (HITL) where there is a human cooperation involved throughout the design to deployment to taking any critical action, which can mitigate some impact from the danger. Even then, it has resulted in various faults and biases.

Sandbox for Artificial Intelligence as a solution?

Similarly in this context it will refer to designing, running and observing the algorithms and AI solutions in a safe sandbox environment which cannot directly or indirectly harm humanity and if it poses a threat then we are provided with time to pre-emptively avoid any damage and take proper measures.

Before going further into the idea, we must acknowledge the success of the regulatory sandboxes established by European Union Regulators which aims to protect society from any dangers and simultaneously fosters innovation in these areas by ensuring AI products and services can be tested within the safeguards.

Similarly in USA, a bill named the Algorithmic Accountability Act of 2019, which would require companies to assess and “reasonably address” risks posed by automatic decision systems is pending strengthening the promise of sandbox.

Why it is necessary?

How global sandbox for AI can solve these problems?

It can pave way for collaboration with the big tech companies and various governmental and non profit bodies, regulation and policy makers, ethical bodies, and others can design a global AI sandbox which can provide a standard global framework aiming to regulate before regulations are even required or enforced.

“Supporters, from both the regulatory and the business sides, say sandboxes can strike the right balance of reining in potentially harmful technologies without kneecapping technological progress. They can also help regulators build technological competency and clarify how they’ll enforce laws that apply to tech.”

Additionally and from a technological point of view, a global sandbox can provide opportunity to every company and researchers to adhere to the ethical design and deployment process. Any bias will be checked and worked upon before impacting our society.

In any case, there might be some issues in achieving global cooperation which is required similar to cases like for CO2 emissions in the past. This might therefore require support from people all over the world.

We looked at what is AI, and how the pros outweigh the cons for betting on Artificial Intelligence in future. Although the pros outweigh, but there may be some grave cons which should not be overlooked. Consequently we came to the realisation that we should have an ethical mindset while developing, designing and deploying AI systems. Since we are responsible for bringing these systems, we should also put emphasis on ensuring that AI systems are transparent, unbiased and serve humanity and our planet. We should focus more on looking for ways to motivate AI research in such a way that we do not put any technological growth cap on this, and at the same time it should not result in any damage to human society. Lastly, we discussed sandbox for Artificial Intelligence as a way forward for enabling AI to save humanity and work with humans to move towards utopia.

One thought on “AI will save humanity, but maybe in a sandbox.”

Since its emergence, artificial intelligence (AI) has continued to play a key role in the labor markets in almost every country on the planet. New and exciting innovations in technology have been projected to greatly improve labor through the automation of tasks,  with online sources claiming AI will help make the workplace easier for nearly […]

AI and health: A perfect match?

The machine plus clinician is better than the clinician, and it’s also better than machine alone Dr. Eric Topol Technological changes are often initially treated with scepticism and it can take some time before the benefits become clear and the progress is accepted. This is of course not a problem specific to medicine, but it […]